One common statement I often hear come up in discussions between horror fans is “Man, I wish I could have experienced that on the big screen” or “Would have loved to see that when it was first released in theaters!” They are generally referring to older films that saw their release when the person was too young or not alive at all to have seen said film in theaters.  As a life long horror fan, I will always be a bit bummed I missed theater viewings for so many films.

Me and my friends were definitely more inclined to catch them on VHS during the late 80’s early 90’s which as referenced by our previous Puppet Master  article was fun in it’s own right and came with it’s own set of good memories. Still, looking back and thinking about missing some of my now favorite movies when they were first released made me think about which ones I actually did catch during their first theatrical run. One instantly came to mind as a standout experience, Freddy’s Dead: The Final Nightmare. 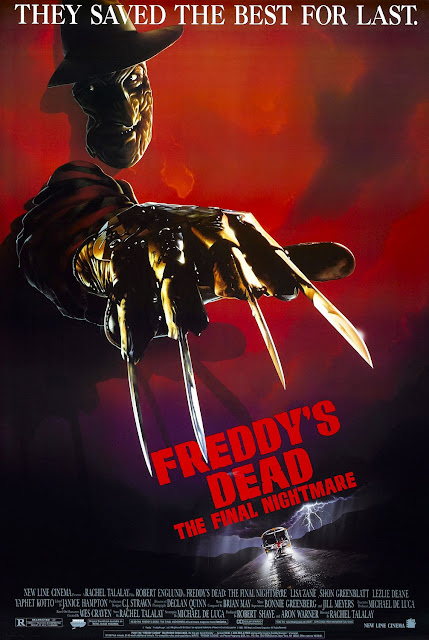 In 1991 I was 11 years old, and at this time back then depending on where you lived, you are starting to get more independent and wanting to go off and do things on your own without your parents. The neighborhood I was living in at the time(during one of my many back and forth moves from NY to Miami) was just on the edge of Miami Beach and thanks to school and the local park, everyone in the neighborhood had a place to hang out and meet and therefore become close friends. By this time we were already going to the movies often in groups to see whatever we could when our parents would drop us off and give us money for popcorn and snacks. The local movie theater was called The Byron Carlyle and just the year before many of us had seen such landmark films as Teenage Mutant Ninja Turtles, Edward Scissorhands, Home Alone, Total Recall and as for horror I still remember my buddy Cesar and I being the only two from our group who wanted to go see Tales From the Darkside the Movie which we ended up loving at the time (I still think its a fun anthology film, particularly that final segment). So going to the movies was definitely a big deal back then even if it seemed our group all had differing opinions on what constituted a trip to the theater. However when news broke that they were killing off Freddy Krueger and in 3D no less, everyone seemed to agree this was an event we all had to be at. 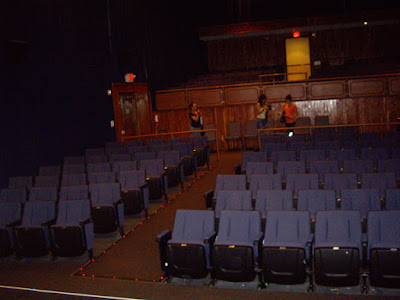 You guys remember the opening scene to Scream 2? Where the theater is showing the movie adaption of the events of Scream 1 and everyone in the theater is going absolutely berserk while watching it? This is how I remember the night we went to see Freddy’s Dead. I don’t remember who bought us tickets or how we got into the R rated movie with no problem, but I we did, more than likely someones parents cool enough to do it, knowing what a big night this was for all us kids to go out and see the death of Freddy Krueger. I remember the line outside the theater was long, and once inside the line to get into the actual theater showing the movie was long too while we waited to be let in, everyone was there, it was jam packed and a big group of us were all there, popcorn and soda and candy in hand, certainly one of us had to have had those terrible movie nachos as well. Once we were let into the theater we had scored pretty decent seats close to the screen. I specifically remember that we were on the right side section of seats as it was one of those theaters where the aisle to walk to your seat was down the middle not on the edges. Which definitely seems weird now and for a moment I was questioning my memory, but I did some searching and sure enough, I was correct, as well as in remembering a balcony area in the back as well. 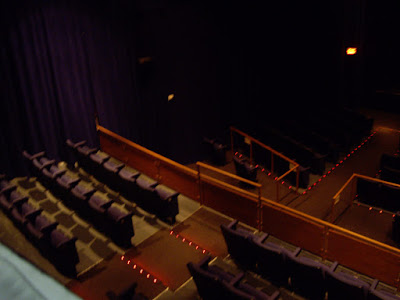 You could really feel the energy and excitement in the theater that night, not only were we there on a weekend night with the adults (who probably hated seeing us all file in there) but we all had these cool movie specific 3D glasses, which back then was absolutely a special thing. Everyone was talking about “How do you think they will kill Freddy?” because at that time New Line Cinemas and all the advertisements were so adamant about him being killed off, we believed it. The film finally started and everyone settled in for the most part to watch what we perceived as history in the making. The audience remained excited throughout, laughing, screaming, and cheering during it’s running time. Everyone also got a big kick out of Alice Cooper’s cameo as Freddy Krueger’s abusive father and the admittedly pretty great Johnny Depp appearance. My friends and I were in on the action as well and it was a blast, but it wasn’t until a certain portion of the film that things really ratcheted up to another level. 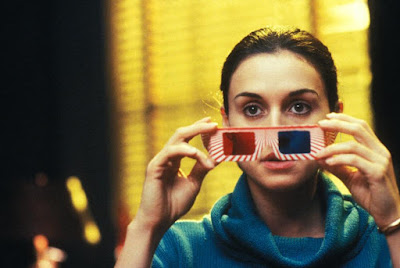 The moment the audience had been anxiously waiting for had arrived. In the film, Maggie (played by Billy Zane’s sister Lisa (who was seen by many of us kids just a year before as a total hottie who gets bludgeoned to death by a golf club in the classic “skinemax” thriller Bad Influence starring Rob Lowe and James Spader, A true treasure for us kids to come across late at night on premium cable at the time.)

Anyway where was I? Oh yeah, the moment the audience had been waiting for had finally arrived, Maggie, who is revealed to be Freddy Krueger’s daughter discovers a pair of 3D glasses just like the ones we had, and you could hear the crowd get hyped as we knew we were about to experience 3D!  It may sound like not a big deal nowadays that every film is in 3D but this was classic pop out of the screen 3D and it was awesome. As she put the glasses on everyone else did while cheering and “ooohing and aaahing” at the site of the creepy “Dream Demons” who granted Freddy his powers floating around on screen. 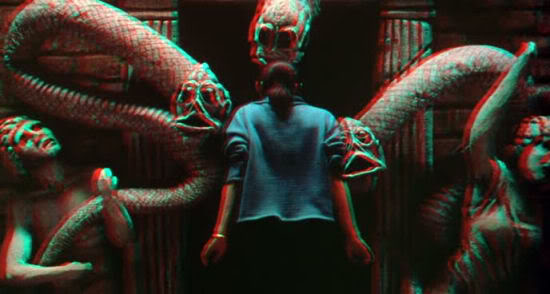 The next ten minutes (the finale of the film) are a bit of a blur, hazy memories of  cheering, screaming and popcorn flying and clapping were all I can recollect until Freddy breaks the 4th wall and mutters “Kids” to the crowd right before he is blown up for good. The crowd loved it, we all laughed and thought we had seen the best thing ever. It was a triumphant night for a group of kids who all banded together, boys and girls, to go watch one of horrors most beloved boogeymen meet his supposed demise in grand 3D fashion. A night that I will always think of  fondly and one of the quintessential movie viewing moments of my life.

Freddy’s Dead is certainly one of the weakest entries into the series and the Freddy makeup is possibly some of the worst looking in the series, but this article is just another example on how the experience of watching a movie plays just as big a factor into one’s enjoyment of it as the movie itself. Hope you all enjoyed this latest installment of TrueHorror Memories. We would love to hear some of your memories about your experiences with Freddy’s Dead as well!