Back in August we attended the Popcorn Frights Film Festival in Miami. The festival opened with a film I knew very little about, but ended up loving. That film as you probably figured out by now was Fear, Inc. As I watched it, I kept saying to myself “People are going to eat this up, especially come October.”

Fear, Inc. tells the story of Joe Foster (Lucas Neff), a likable yet lazy horror movie junkie, with a love for all things scary. Jobless Joe lives with his successful, loving and very patient girlfriend Lindsey (Caitlin Stasey). From the get go it is obvious Lindsey loves Joe despite his job related shortcomings, as evidenced by her willingness to spend date night out at a seedy haunted attraction (Joe’s choosing). A place that eventually leaves Joe lamenting the fact that nothing scares him anymore. Overhearing this, a stranger (Patrick Renna of Sandlot fame) hands the couple his business card saying his company can change that for them. To provide just a bit more set up to give context of the rest of the review without spoiling anything, the next day Joe’s best friend Ben (the always reliable Chris Marquette) and his wife Ashleigh (Stephanie Drake) come to visit to spend Halloween with Joe and Lindsey. As you may have guessed, Joe, against the pleas of everyone, decides to call Fear Inc. inadvertently getting more than he ever bargained for.

Upon seeing the film I voiced my positive reaction to it on social media and eventually found myself discussing it with the films writer and producer Luke Barnett. I asked if he would be interested in doing an interview for us and he was more than happy to oblige. 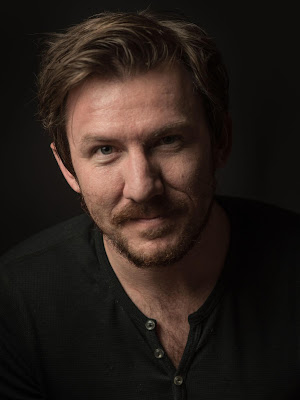 1. I know this question is generic as all hell, but I am truly curious this time as to where did the concept for this project come from and was it always envisioned as a bit of a comedy/horror hybrid?

I had a friend who was obsessed with haunted houses. One year he went to Universal Horror Nights, Blumhouse of Horrors, the kind of attractions that put millions of dollars into production value. And yet, this guy was always disappointed. Then he found out about Blackout, which promised to be the next level in haunted house. It’s $100, you go through by yourself, sign a waiver, and people can really touch you. He asked if I wanted to go, to which I kindly replied, hell no. I saw him a couple weeks later and asked him how it was. He said it was better than the others, but he wanted more. Basically, this guy wanted to feel like he was going to die, and then just…not die. I thought, what would the next level in haunted houses attractions be? What would satisfy this guy? I think that’s Fear, Inc.

We knew we wanted to expand on this idea and make a twisty sort of thriller. Our background is comedy, working with Will Ferrell’s ‘Funny or Die’, so we naturally infused a lot of that into the script.

2. One thing I really enjoyed about this film was that balance of comedy versus horror. Some Horror comedies, go off the rails trying to be funny and you really lose any sense of danger or investment. With this one however, the comedy is there because these characters, Joe and Ben in particular, come off as just naturally funny guys. Their friendship felt very real, and the comedy as I said, felt natural and not shoehorned in. How do you feel you struck that balance of horror and comedy?

While we love Tucker and Dale, we didn’t want to make a campy horror-comedy. We wanted more of a Scream sort of vibe. When it’s funny, it should be really funny. And when it’s scary, it should be really scary. While we appreciate the current trend in smart, “elevated genre”, to be honest, we really miss the fun of watching a horror movie. That’s the key thing we were aiming for.

We also cast really great actors. Lucas Neff and Chris Marquette are hilarious guys, but also incredibly smart. Everyone really added a whole other level to the characters. I think that made the comedy feel less forced into the intense situations.

3. Discussing the film with others, many of us agreed that the fact that we spend enough time getting to know everyone, and that the humor does work, helps us actually care about the characters fates when things get crazy. Part of that is for sure a credit to the cast, what was the casting process like? and how did you decide on the four leads?

We were really lucky that the agents really liked the script. They are essentially the gatekeepers. Even though we had a tiny budget, they could see the potential for their clients. We took meetings, we didn’t hold auditions. We cast Lucas Neff and Chris Marquette first as the two guys needed to be believable in age and as friends. Lucas had just finished starring on the FOX sitcom Raising Hope and we actually grew up watching Chris in movies like The Girl Next Door and Just Friends. Funny enough, Lucas and Caitlin Stasey are together in real life. We didn’t realize that until a couple days before our meeting with her. She came into the room and when we asked if she’d read the script, she said “well, I live with the actor playing Joe, so…” Stephanie had just come off Mad Men where she stole every scene she was in as Don Draper’s secretary. We couldn’t have gotten a better cast.

We met with a LOT of amazing actors, but in the end, I can’t imagine Fear, Inc  with anyone but these four.

4. There are quite a few references to classic horror movies here, Scream comes to mind right off the bat, among others, I am very curious to know how you guys decided on which ones to pay homage to, while still being able to serve the script?

I think it was a combo of movies we love, and movies we thought Joe would specifically want to be immersed in. We tried to get in the head of the character and combine the classics he would have grown up with and the more modern movies, like SAW, that he’d probably be a fan of.

5. This was a major Spoiler question that we were curious about, but we will wait to post it a bit after the film is released so as not to spoil a major plot point.

6. The film does not mince on the violence and gore, which is one of the reasons it blurs that horror/ comedy line, was this a conscious decision to make sure that the horror bits resonated and didn’t come off as campy?

Definitely intentional. Like I said, Scream is a great example of a film that did this same thing right. We wanted the humor to be really funny and the scares to be really intense. We set out to create a rollercoaster, and I think going from comedy to terror really gives that feeling.

7.  I was excited to see that the films release date lands in October, this is a perfect movie for that, do you guys have any thoughts on releasing a film like this in October, versus say…the summer? I always wonder if it is an actual thing people care about or if it is just me being a Halloween nerd.

It was the goal, but it was a really tight deadline to hit. We sold the film at the Tribeca Film Festival in April, so only had 3-4 months to prep the release in order to hit Halloween. We got lucky it all worked out. That being said, I think with a fun horror movie, releasing at Halloween is only a perk. Not a deal breaker.

8. Lastly, Fear Inc. is about a company bringing ultimate fear to life, what scares do you guys think would be brought to life for you, if you called Fear Inc.? 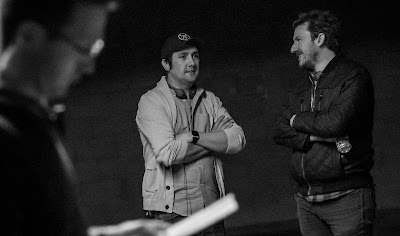 We want to thank Luke again for taking time out to talk with us, it was great to hear more about the film and we really appreciate it.

Fear, Inc. is available On Demand on October 21st via all VOD outlets along with iTunes, Amazon and Hulu.