The Insidious Experience: An Interview With Leigh Whannell

Insidious has gone from a small low budget horror film to a full blown horror franchise powerhouse. The little horror movie that could came out of nowhere and ended up being a huge hit, becoming the most profitable film of 2011 while earning a total of 97 million dollars off of it’s reported $1.5 million budget. Insidious delivered a fresh take on the haunted house genre by crafting a story which combined the best of the genres concepts and blended them with new ideas and an artistic eye.

Upon the huge success of the first, a second film “Insidious Chapter 2” was quickly put into production and would continue the story of the first as well as adding new story elements via flashback sequences which served to flesh out the characters history. Both films delivered plenty of creepy imagery and sequences and I clearly remember the first film scaring the hell out of my crowd, causing many to scream, jump and others just to sink into their chair covering their eyes. It was great time and I myself remember finding it to be one of the best new horror films in recent years. I am a huge fan of creepy films that give you chills and Insidious did just that anchored by it’s strong cast of characters. I was excited when the second film was announced and it too picked up right where the first left off. The same combination of spooky fun and eerie set pieces was here and for the most part just as effective. The franchise has certainly divided audiences, it’s PG-13 rating warding off the hardcore gorehounds who feel there is no place for yet another ghost related film in the world, while there are others who enjoy the care and effort put into these films and find the suspense and creepy scenarios to hit all the right notes. Such is the world of horror fandom. Still the films remain in the hands of those who truly care about it and are not simply “hired guns” cashing a check. That is one of the aspects I respected about it, it was a passion project for it’s creators and I personally feel it shows in the final product and for me that makes all the difference in the world. 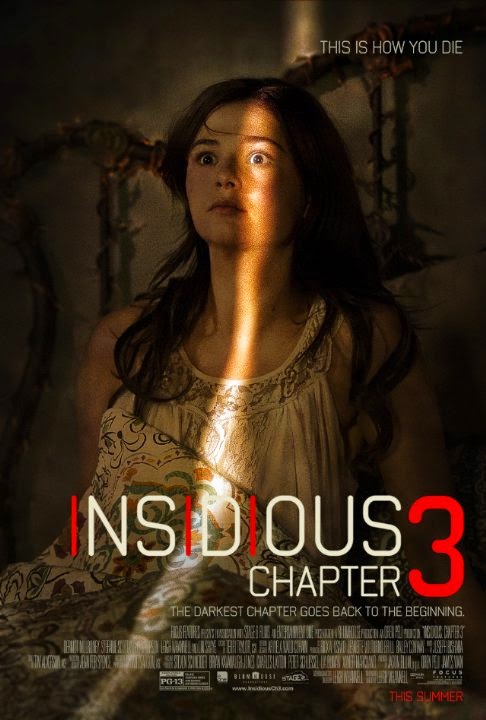 Fast forward to 2015 and we are nearing the release of the latest chapter in the Insidious Saga, Chapter 3. This time in place of his partner James Wan is series co-creator and star Leigh Whannell. This will be Whannell’s first time directing after years in the film industry as an actor, writer and producer on a number of films from Saw to Dead Silence and of course the Insidious series. Yesterday I was lucky enough to be invited to a special press event for the “Insidious Chapter 3 – Into the Further 4D experience (more about that in a bit) as part of the films promotional tour. As part of that, I was able to sit down with Leigh himself for a quick interview. It was all very last minute and I wish I had more time to formulate my questions prior, however I did get to ask him the majority of stuff I had prepared which he was more than happy to answer. You can watch the interview below.

As you can tell from the video, Whannell is a very humorous and easy going, down to earth person who is extremely passionate about horror and film. That passion is sure to extend itself to this supernatural world he has helped create and these characters that inhabit it. It is also apparent that he was very excited at the ida of reteaming with actress Lin Shaye who plays Elise, to get to tell more of her story and what she has gone through. It is when hearing him discuss her involvement and what her character will be tasked with here that I really started to anticpate seeing this new film and seeing what they have in store for her and audiences alike. I knew I would only have a few minutes to speak with him and naturally the more questions he answered the more that popped into my head that I wouldn’t be able to ask. There is one however that I do regret not being able to ask and I was kicking myself after because I had thought of it earlier in the day as well. I would have asked him with James Wan having been the visual force behind the first two, how does he intend to put his own stamp on the franchise and this universe from a directors standpoint. It is one of the things I am most looking forward to seeing, just how does this film differentiate itself from the others while still being part of the same story in a sense.

UPDATE: Luckily, Whannell was kind enough to check out this article and took the time out to answer this unasked question via twitter. I can’t thank him enough for this because by doing so he has stopped me from continually kicking myself forever for forgetting to ask it in the first place. 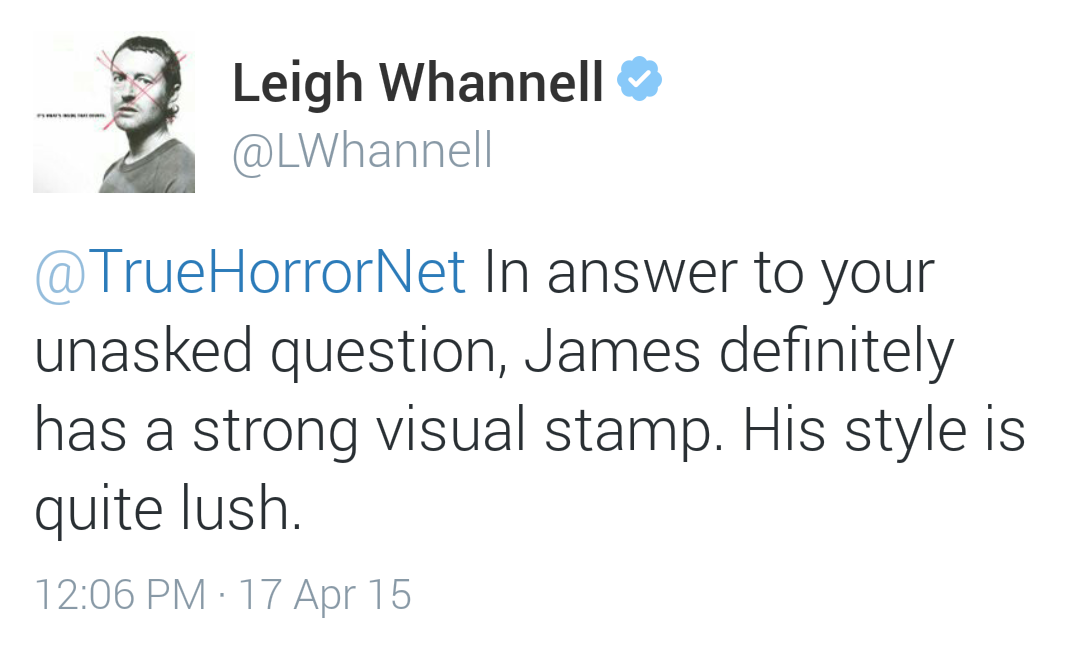 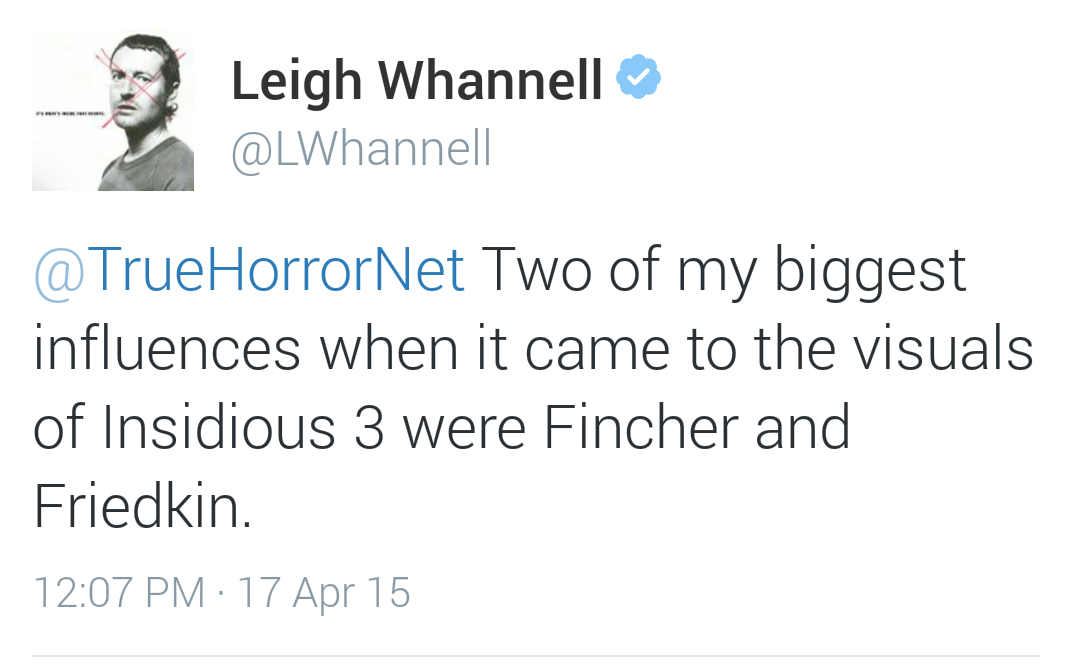 So there you have it, he definitely will be putting his own twist on the films visuals and I am looking forward to seeing how his visual influences come into play on screen. Listening to Whannell speak about his characters and horror in general even for a short while, I have no doubt that he is up to the task and I am rooting for him to succeed and deliver a new and creepy experience for audience to fear. 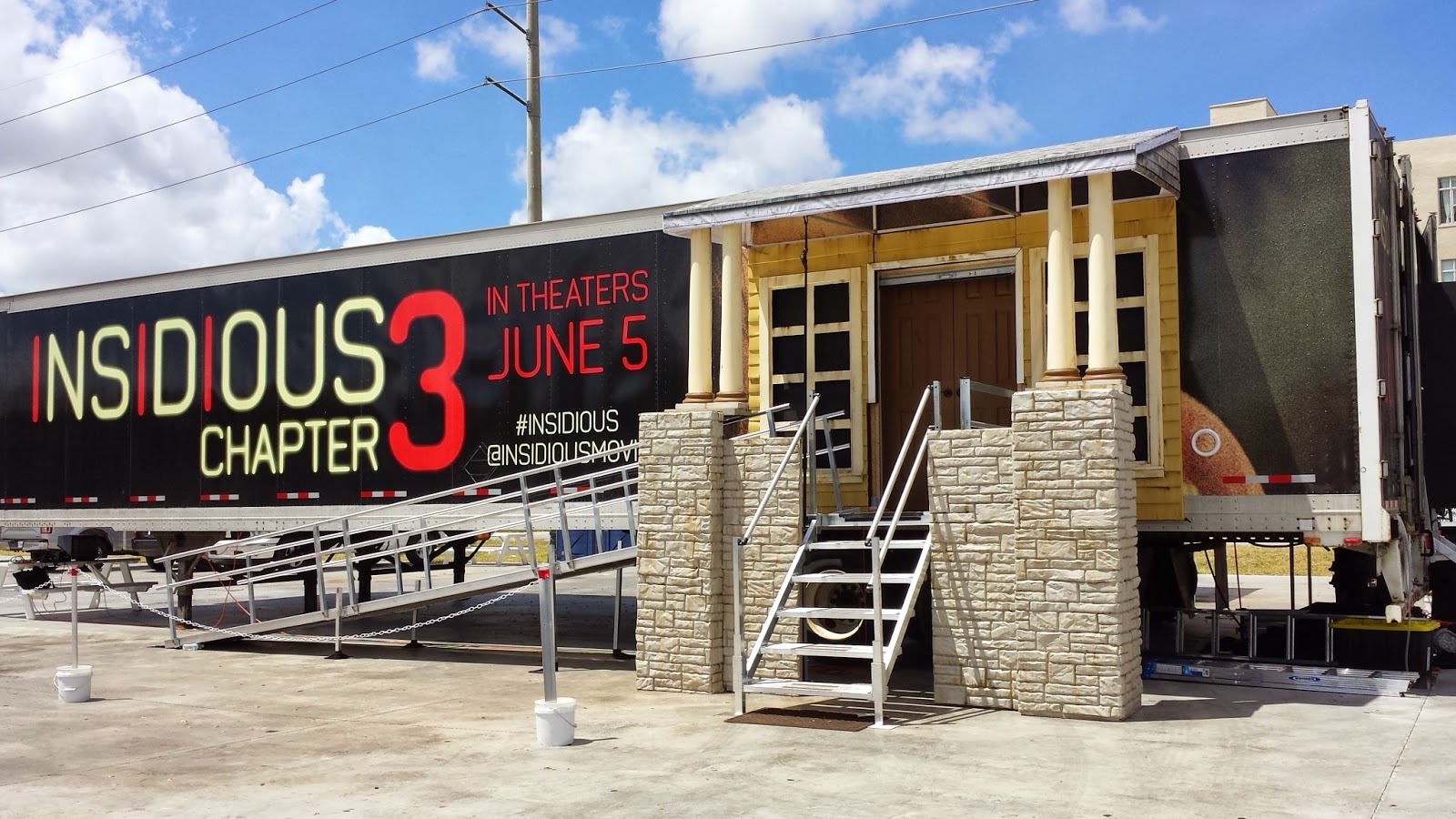 Now speaking of creepy experience, the other part of the day involved what you see in the photo above, that is one of the two trailers that house “The Further 4D Experience”. Fans of the series know that the “The Further” is the name of ghostly otherworld populated by the lingering spirits of the dead. As part of the films promotional campaign Focus Features is inviting you into that world via what is best described as part haunt, part virtual reality experience. The Haunt part is similar to your traditional haunted house many visit during October, once you enter. You are in a dimly lit hallway featuring props and set design that match the film. My favorite item being the bizarre gas mask wearing, wooden mannequin seen in Elise’s basement in part 2. 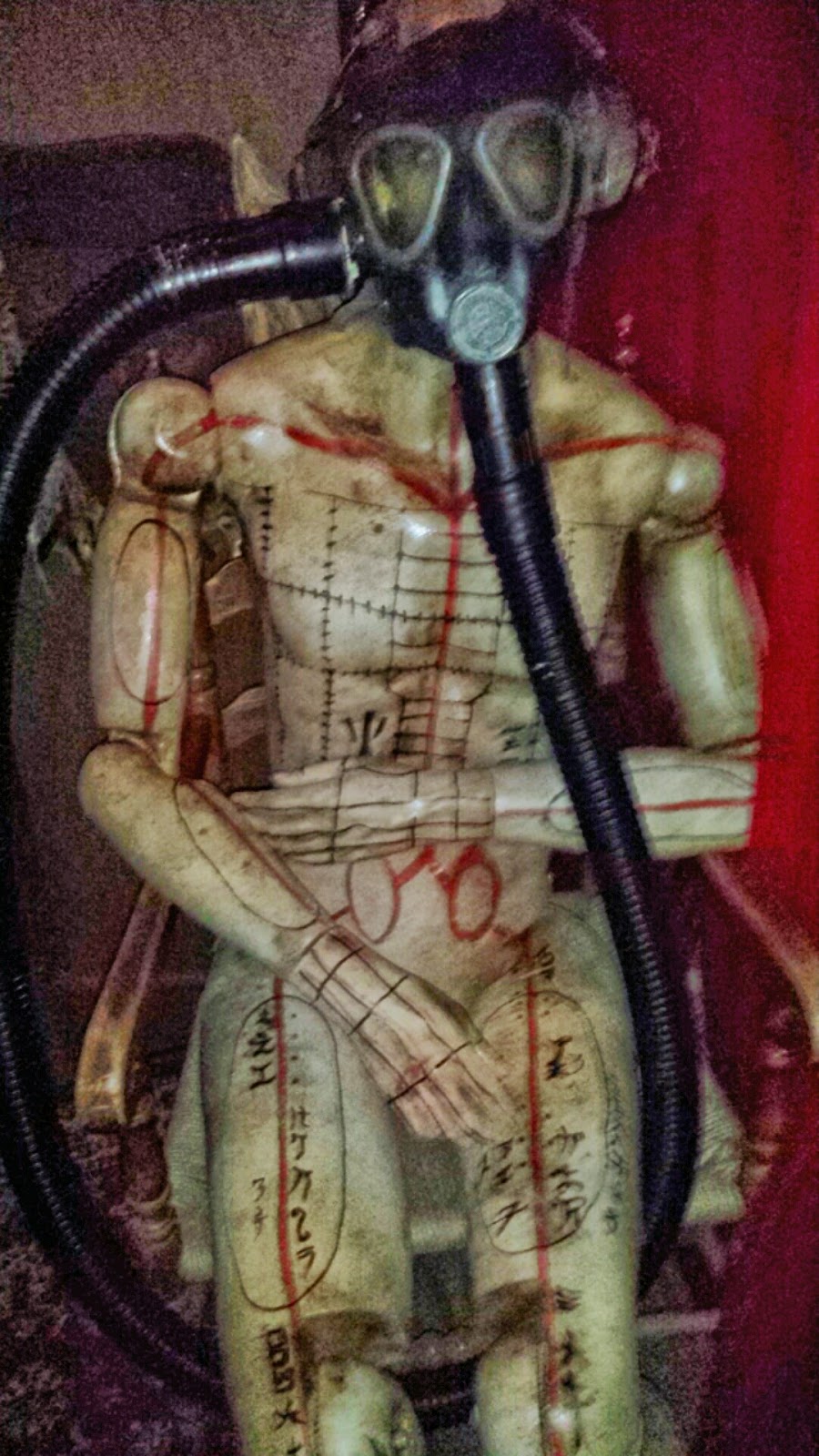 After you are greeted by your host at the end of the Hallway, you have to make your way through another short corridor till you reach another very dimly lit small room, you enter and sit down in a chair, it is hear that you will make use of Oculus Rift headset which is a fancy name for REALLY good virtual reality headgear. Once you place this on securely you are instantly transported to the living room of Elise’s house and she is there with you. Actress Lin Shaye filmed all new material for this I imagine, and as she speaks to you warning you of dangers abound, you can freely turn your head looking around the room and up at the ceiling and you feel as if you are truly in this space. Inanimate objects move around the room, you see shadows in the windows, you feel a draft or something gently brushing against your shoulder, then it starts to get extremely creepy. I won’t spoil it here in case any of you will be attending one of these, but I can say without a doubt that this is the closest I have ever felt to being in an actual horror movie. A haunt is one thing and those are awesome fun and can be scary as well, but this is a totally immersive experience where special effects come to life before your eyes, you feel as if you are in the movie and it’s awesome. My only gripe would be that it is too short even if I understand the concept of time constraints and budgets. I had never used the Oculus Rift technology prior to this event and it was extremely impressive, I can imagine it not working for all things they have been applied to, but for Insidious where you literally are just sitting in someones living room it all feels very natural. 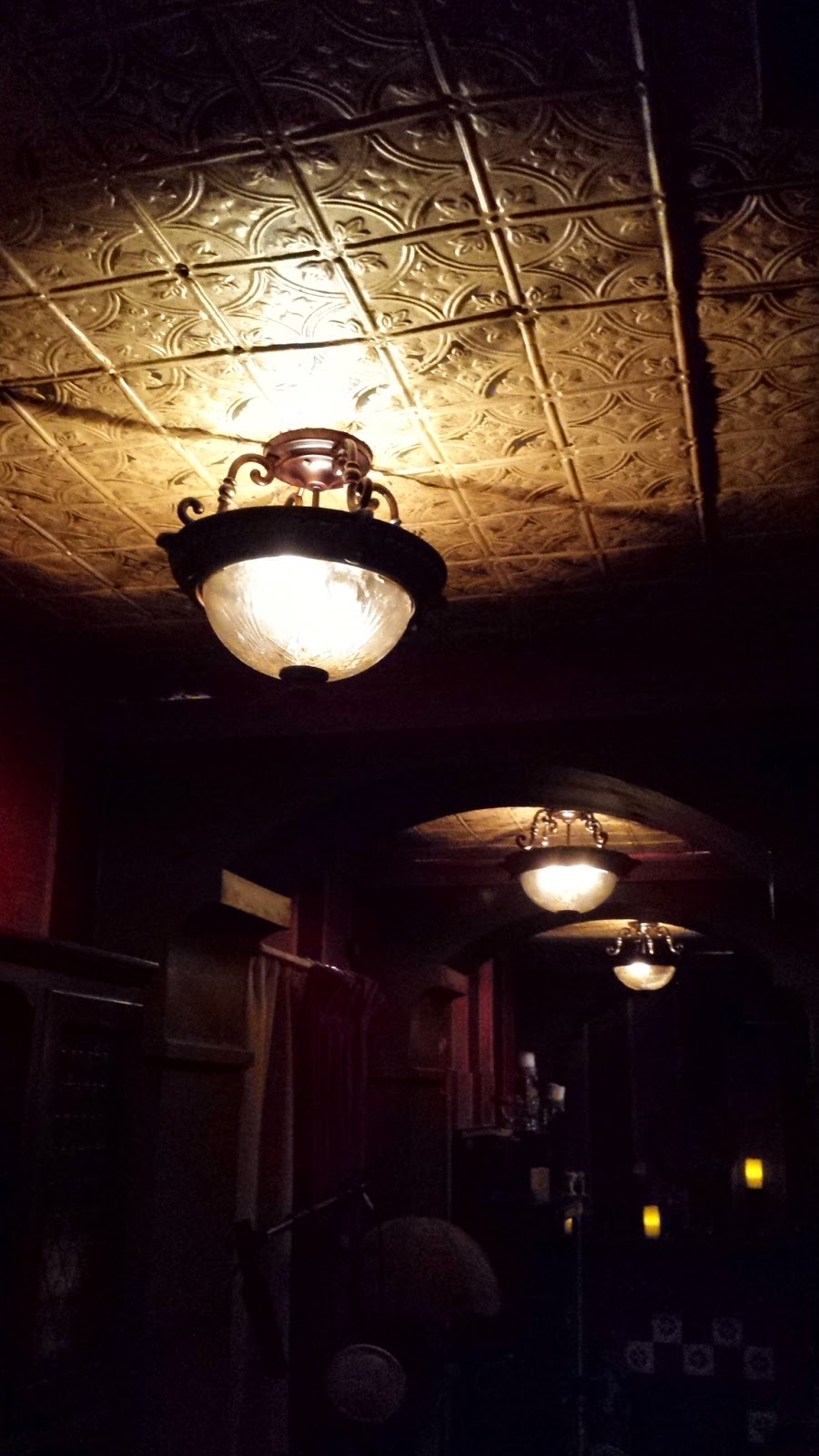 The Further 4D experience is a free exhibition that will be traveling.to major cities within the next month leading up to the films release. It doesn’t take more than 15 minutes tops to complete the entire walk through, but it was still a very enjoyable time. I can’t recommend someone to drive for an hour to go to this unless you are A. really bored and/or the more likely B. just want something different and unique to do that won’t be around long and can be your first fun stop during a night out. For that I can definitely recommend it as it is definitely very cool just not something that will take up your night. Overall I truly had a fun time with all of this. It was really cool to be able to meet and interview Leigh Whannell, I enjoyed talking with the different friendly people from Focus Features such as Kirstin and Ryan discussing movies, horror and other related topics. In addition I also got to meet some other new like minded people while waiting to go into the experience itself. All of this has easily helped heighten my anticipation for the next chapter in the Insidious Saga and much kudos go to Focus and everyone involved with the Insidious franchise that helped put this all together at no charge to us, the visitors, Nothing wrong with promoting the film while offering us the fans a fun way to experience what it feels like to be trapped within the mysterious Further.