This article was originally published on July 12, 2015

Fear is something we all first experience in some shape or form at a young age. Whether it be the fear of the dark, fear of sleeping alone, and of course the dreaded monster under the bed. As children we are at our most impressionable and our imagination knows no boundaries, so you never know just what might make the wrong impression in terms of frightening you and you may not even know why it had such an effect on you. You just know you don’t like it and want to stay away from it. As adult horror fans, we seek out the fear, anticipating and hoping for it whenever we watch a new film or enter that haunt during October. We crave the experience of being scared and the rush that comes with it. Fear and horror go hand in hand, yet no matter how creepy the latest film is or how cool the new poster for it looks, there is nothing like that fear you felt as a child when watching those first horror films or coming across that eerie VHS cover art.

One of the main things I wanted to focus on when I started this site was to put a personal spin on things when possible, especially when it came to talking about films and my experience with them, particularly associating my memories of my youth with their first time viewings and how those shaped and informed my likes and dislikes today. I find it supremely interesting to delve into just what makes something scary to someone as horror fans are such a finicky bunch, that we all have different tastes and expectations when it comes to what a horror film should be. I wanted to further explore this subject by reaching out to other horror fans who are invested in the genre in many different ways, and learning about their early experiences when it came to the combination of fear and horror films. So I came up with a list of questions and will be asking those same questions to all of the participants. I am excited to share these interviews with you all as I feel they will bring a personal touch to the site and help you better understand your fellow horror fan. This week for our first “Dissecting Fear” interview, we are honored to have Fright Rags founder Ben Scrivens, who was kind enough to take time out from his busy schedule and delve into a bit of his history with horror. 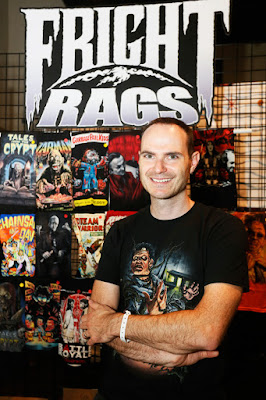 As a child what horror film and/or horror character scared you the most and why do you feel they had this effect on you?

I suppose most of the main iconic characters spooked me out at least once or twice as a kid. However the one that got me the most was Michael Myers. As a child, he scared me more than anyone and was the reason I started liking the genre.

Do you have an example telling of an instance where this fear really manifested itself and had an impact on you and your behavior?

Since there was a span of about 7 years between Halloween films that featured Myers, I grew up watching the original Halloween and the sequel for the most part, I recall one time when I was 10, having watched those back to back and not being able to sleep all night because I kept picturing him coming into my room. I ended up sleeping on my parents’ bedroom floor.

What VHS covers or horror movie posters scared you as a kid and why do you feel the poster or cover had this effect on you?

What affected me most were the posters and standees in video stores. Films like Prom Night 2, Child’s Play, Hellraiser, any A Nightmare On Elm Street or Friday the 13th film; they all intrigued me. Of course just browsing through the horror section at any video store. That’s why we have a VHS video wall at the office with all our horror VHS lined up…it brings back fond memories.

Do you have a specific example of a time you may remember that you have come across one of these and it had that effect on you when you were younger?

I don’t recall any in particular, just the excitement of walking into a video store or theater and seeing a poster of what was being released soon. Those are some of my most vivid memories.

What is your definition of “scary” when it comes to modern horror films these days? So many people are quick to say a film isn’t scary, but each person has a different definition of just what “scary” means.

I think scary should be timeless. Many films seem to overuse modern techniques in an effort to “scare” audiences but it just comes off as cheap. That has been happening for decades though. But the ones that cut through and are scary to me are the ones that focus on atmosphere and not just effects.

What is a modern horror film you would say actually scared you?

“Insidious” was a film in recent memory that scared me in the theaters. While it shares many of the hallmarks of modern ghost films, I felt that it established mood and atmosphere quite effectively so that any effects complemented that, rather than were the main focus. Well, at least until “Darth Maul” came in at the end! Another recent film I enjoyed was “It Follows”. While it didn’t scare me, it really set a mood that stuck with me afterward. That is a sign of a good film to me.

Any film with no heart that just tries to cash in on trends to make a quick buck.

What do you look for or want to get out of horror films these days?

I don’t look for much – just to be entertained. If it makes me think, great. If it’s just fun and entertaining, great. If I done with the film and felt that I would not want to see it again or that I was bored, then I’m not a fan. I’m pretty easy to please. I don’t think there will be anything that comes close to the films of my youth – not because they were somehow better – but because of the time I watched them. We all have this yearning for days gone by that gets us all nostalgic when we talk about watching horror films as kids. I don’t expect  that to happen again watching a movie as an adult. There have been times it has come close, but nothing gives me the same feeling as a movie like “Halloween” or “Night of the Living Dead” do, because of all the memories attached to those films.

I’ve really enjoyed a few recent ones like The Babadook, It Follows, and Starry Eyes. While they are different films, I felt each one really focused on mood and atmosphere. It’s too early to call them classics, but I think they are some of the better films to have come out in recent years.

Lastly, do you feel there is a certain way or mindset to have to watch a horror film as far as it being effectively frightening?

I have to go into a film with no pre-conceived notions, for example, if I am expecting to be scared, I will be let down. I remember seeing “Stir of Echoes” in theaters and not expecting much and was quite frightened by it. It didn’t hold up on video, but in the theaters it really got me.

Be sure to check out the Fright Rags website where you can see all of their awesome and original horror shirts and products.

Dissecting Fear: An interview with Billy Polard / The Ghost In You