The Triangle is a film I was recently given the opportunity to check out. Knowing little about it but being a fan of mocumentary/found footage style films, I was intrigued. The plot and initial set up sounded very reminiscent of Ti West’s The Sacrament. So while I was intrigued I was also hoping it wouldn’t be too similar. Luckily it does a pretty good job at not only separating itself from that film but also from other mocumentary style films as well. It does so while delivering an eerie viewing experience

The Triangle  follows the story of four filmmakers who, after receiving an unsettling letter from their estranged friend, set out to the isolated Montana commune that he is currently a part of. With cameras in hand, they are given permission to enter and document the mysterious community as they try to figure out just what it is all about. So yes, I am sure you are saying to yourself, that DOES sound just like The Sacrament, however that is about where the majority of the similarities end, with the rest being merely superficial. 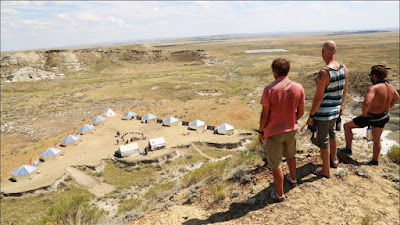 One of The Triangle’s biggest strengths is that it truly feels as if it is a real documentary. Not only due to the flawless way it was filmed and edited, but also conceived. The actual filmmakers who play our fictional filmmakers, did not have extensive knowledge of what they would be getting themselves into when they arrived on set, so they are “learning” about the Triangle and it’s inhabitants practices, just as their characters and the audience are. This leads to a truly authentic experience for the viewer. It is also aided greatly by the realistic portrayal of the “cult” members that we are introduced to.  While one could certainly categorize the group that inhabits the commune as bizarre, eccentric and even aggressively defensive, they never come off as overly threatening or dangerous (ie obviously bad). Lead by a wonderful performance from compound leader Andrew Rizzo (playing himself as everyone in the film does) the residents of The Triangle for the most part seem like a bunch of “normal” people. They are just a group that decided to try a different way of life and took action by pursuing that no matter the sacrifices of modern convenience. The full cast is likable and more importantly believable, and everyone does a solid job portraying the reactions to the situations presented within the film while feeling completely natural in their newfound environment and social structure. 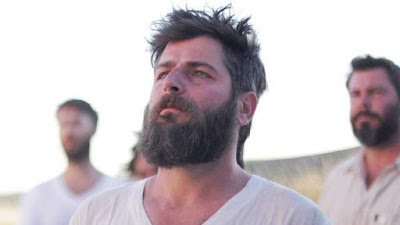 While the majority of the characters our filmmakers meet may not be “frightening”, the film manages to create a remarkable sense of mounting dread in other ways. A big part of that is thanks to it’s desolate setting out in the middle of the Montana wilderness. The “Triangle” commune site is at times beautiful, other times eerie and threatening. A strange rock formation, just in the distance of the camp site features an ominous cave entrance that will almost certainly factor in later in the film. Without spoiling too much, I can say that there is more than meets the eye when it comes to the commune members reason for being where they are.

One problem I have found myself having while reviewing The Triangle is the fact that it is difficult to do the film justice without giving away what makes it ultimately work. While I generally do not like to give spoilers in my reviews, I do feel that this review may end up being a bit too vague. Which in all honesty seems fitting considering The Triangle is essentially a mystery. The filmmakers themselves have come up with the #goinblind tag for it. This film will absolutely not be for everyone, I concede that much, however it hooked me in pretty early and didn’t let go. Those with patience and an open mind should find it an engaging story, that gets under your skin as it progresses. The Triangle is all about the unknown and how that can be one of the scariest things in life. It is a different kind of horror film, one you might not be used to or comfortable with, and that in my opinion is something that is always welcome and more importantly, always needed.

THE TRIANGLE IS WRITTEN AND DIRECTED BY ADAM STILWELL, ADAM PITMAN, DAVID BLAIR, ANDREW RIZZO AND NATHANIEL PETERSON AND IS NOW AVAILABLE ON THE FOLLOWING ON DEMAND AND STREAMING SERVICES