It’s been just over four years since the first Insidious film hit theaters and turned a relatively small 1.5 million dollar budget into a worldwide gross of over 97 million. I still remember sitting down in the theater having no real clue what I was getting into as I stayed away from the trailers as I often try to do. It was a great movie going experience, the crowd was into it and there were plenty of screams throughout. I remember thinking what an unexpected yet pleasant surprise it was that I found so much of it to be extremely creepy. The cast was great, with Patrick Wilson and Rose Byrne lending the film and it’s proceedings plenty of credibility. Even when things could have gone horribly wrong with the introduction of Elise (played by the always reliable Lin Shaye) and the comedic ghost hunting duo of Specs and Tucker, the film still managed to hit all the right marks and leave a lasting impression. I was sure to tell everyone that would listen to check it out and mostly everyone that did enjoyed it. 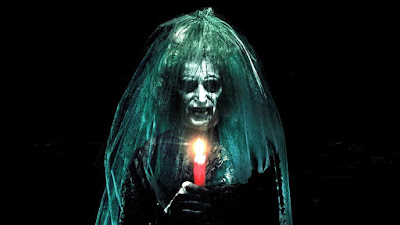 When news broke of Chapter 2 being made, I was particularly enthused to see what Wan and Whannell had up their sleeve. When the time came to finally check it out, I ended up being split on how I felt about it. There were plenty of things I genuinely loved as I found certain scenes to be chilling and eerie like the hidden room with the church pews filled with sheet covered corpses. Other aspects of the film I was less than enthused with. I thought some of it crossed the line into camp or came off as a bit unintentionally silly, particularly some of the Elise versus the ghosts stuff. Still once I knew what to expect those elements felt a bit more at home and were less jarring on subsequent views. The film still had strong and likable characters, and James Wan did some great things with the stylish look of the whole thing which is always one of his strengths. So while some of the film didn’t go where I may have wanted it to I still loved where it left off.  Which brings us to Chapter 3…

Right off the bat, Chapter 3 does not take place where the previous film left off. Chapter 3 is a prequel that takes place before Insidious 1 and 2, yet AFTER the prequel portions featured in Chapter 2. You still with me? So Chapter 3 focuses on two distinct storylines. I would consider the main one the story of Quinn Brenner (played perfectly by horror newcomer Stefanie Scott) and her stern yet loving father Sean (Dermot Mulroney). The second storyline focuses on Elise Rainier who begins the film as a much different Elise than we know from the previous two installments. Everything kicks off when Quinn, mourning the loss of her mother, seeks out Elise in an attempt to contact her mother from beyond the grave. As you can imagine things don’t go as planned for anyone and all hell breaks loose. The films story is built on the theme of learning how to cope with the loss of a loved one is front and center and creates a parallel narrative for both Quinn and Elise. Now If you have read my reviews before I tend to not go into spoiler territory and will do my best not to do so here. I just don’t care for reviews that recap the story of the entire movie, thats not a review to me, it’s a summary. 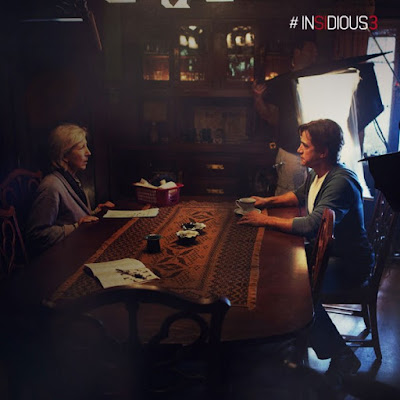 For the first two acts I would say the film really sets everything up nicely and has a great sense of dread and everything is played dead serious. Which is something I was really pleased to see being that I had hoped this installment would take on a more serious tone than the previous one. The actors are all game here, especially Stefanie Scott who really is able to get you on her side early on with her innocent and likable performance. It is that performance that makes you feel all the more sympathetic and fearful for her when things start to take a turn for the worse. Mulroney does well enough with what he is given to work with here, where a lesser actor may not have provided a strong enough presence, Mulroney does so with ease in what could be considered an underwritten part. Still it may have been underwritten by necessity as there is plenty of time and development given to Lin Shaye who is the heart and soul of Chapter 3. This is essentially the “origin” story of the Elise we come to know in the first two films as she struggles to use her gift after suffering a huge personal loss. Whannell and Angus Sampson who reprise their roles as Specs and Tucker are also given a tiny bit more backstory. Though I will say there is a little brother character in the Brenner family who probably could (and should) have been removed altogether and the film wouldn’t have lost a step and maybe would have made the Father/Daughter bond a bit stronger as a result. Still the main cast members all bring something worthwhile to the table. 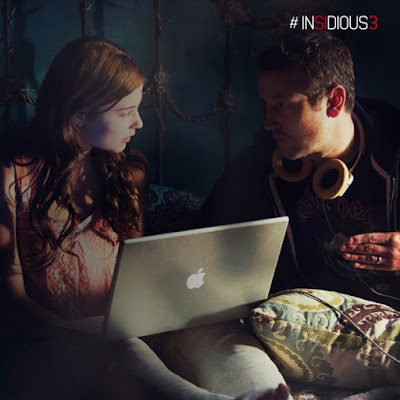 One of the big things about this film is the fact that series co-creator Leigh Whannell is running the show. Whannell in his first time as director (he is the film’s writer as well) does a lot of things right here. When I spoke to him a month or so ago, he said he felt this story was worth telling because he really was interested in exploring Elise’s past and learning more about the character. He also stated how William Friedkin was a big influcence on his approach for the film, as well as implementing all he learned working alongside James Wan in their previous ventures together. Insidious Chapter 3 looks great, it feels as if it’s in the same world as the previous 2 films, yet still carves out it’s own space. Whannell also stated the main “demon” of the film was quite scary and I really did like it’s design and the scenes it was involved in even if it’s backstory or reasoning is thin at best. There are two specific scenes where Quinn comes into contact with it that are simply masterful and show Whannell’s understanding of what makes a horror film work. Plenty of creative shots and nicely set up scares fill the first half  or so and I was really excited as it was all coming together nicely. Still the film was not without it’s hiccups. 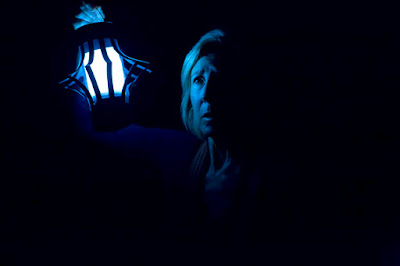 As stated before, the first two acts of the film is particularly strong, creepy and refreshing for the franchise. It expands on the world of the first two films by making it seem larger than whats going on inside those three or four houses where everything prior has taken place. I was totally on board as some of the early set pieces and scary scenes were very intense and well staged. So it was a bit of a letdown for me, when the film kicks into it’s final act, and it cannot match the intensity of the first half (sans a pretty cleverly executed possession scene) perhaps the final act felt a bit too familiar of climaxes that have come before it in the series which is possibly what bothered me. I love the concept of the ghost world of “The Further” and would love for them to expand on it just a bit more, but here it felt not where near as scary, a bit rehashed to an extent and that dulled it’s effectiveness I felt. This lead me to wishing the whole thing played out a bit differently. There were also a few scenes in that last act that reminded me of some of the unintentionally silly or cheesy stuff that really bothered me in the second film. Some of that stuff here, especially scenes where Elise must physically go toe to toe with one of the dead/ghosts, doesn’t play well on screen, and kind of took me out of a film that I was really wanting to get behind due to all the love and care it is made with. Make no mistake though Chapter 3 isn’t one of your run of the mill “product” films such as the dead on arrival Poltergeist remake. Leigh Whannell and the cast put their all into this film and they truly believe in the material and their characters and even when the film falters at times, that love for what they are doing still shines through.

Insidious is a strange franchise in a sense that it seems to have divided horror fans into groups who like it and don’t like it. Some people just do not like this type of horror film no matter how much care is put into it and they feel it is more of a studio product pg-13 ghost movie when it is really not. It is essentially an independent film that hit it big, just like another of Whannell and Wan’s creations did, when they created the Saw franchise. People were very split on those films as well and the sequels worked to varying degrees of success. So in the end my initial feeling on Insidious Chapter 3 was that it starts out extremely strong and intense and along the way kind of loses steam and brings in some of the elements I had hoped might not resurface while leaving me wishing for a much more intense and scary climax, Still for die hard fans of the series, you will have another solid installment that expands on the Insidious universe and it’s characters while also opening up room for more unique stories in the future. For non fans of the franchise, this one won’t be the one that makes you change your mind, as it wears it’s pedigree proudly on it’sleeve. I myself lay somewhere in the middle of those which makes sense seeing as how my feelings on the film are split down the middle, for all the good and creepy things it does well, it also does some things I would rather it didn’t that stymied my excitement. That can be a problem for a lot of films that start out so strong and then falter a bit towards the finish line. 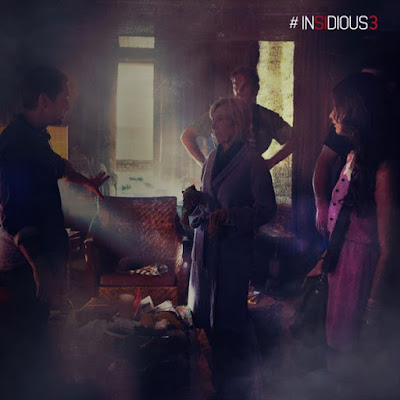 Still as someone who has enjoyed the franchise well enough, I can certainly say you definitely should check out the film for yourself as it is still worth watching and you will certainly get some superbly crafted horror moments throughout. I feel even for myself that I may enjoy it much more on a second viewing as I did with the second knowing what to expect. I can also say that I do look forward to what director Leigh Whannell does next because despite the things I did not like in the film, he has proved himself to be a more than capable director with the work he has put on display here while getting solid performances from his cast who help carry the film even when it doesn’t work as well. Insidious Chapter 3 went back to the past for its story and I am now interested in seeing what the future holds for Chapter 4, just like the Saw franchise there are a few paths that are set up it can take and after all is said and done,and even with a few bumps in the road, I am still interested in seeing how deep into the Further this franchise can go.