James Wan has carved out quite a legacy for himself as a horror filmmaker. Throughout the 2000’s he and his good friend/filmmaking partner Leigh Whannell ushered in mega franchises Saw and Insidious (along with it’s two sequels). In between that the duo then delivered the spooky ventriloquist horror Dead Silence. In 2013 not only did he direct Insidious Chapter 2, but he also set out on his own and introduced audiences to what I consider one of the best horror films in recent years, The Conjuring.

My theater going experience seeing that first Conjuring films is the stuff a horror movie goers dream was made of. It was the Thursday Night premiere, a 7 pm showing, the weather was absolutely dreadful, as a massive thunderstorm had blanketed the area, luckily, the theater was just around the corner from my apartment, so two minutes in the car and a mad dash for the box office and I was there safely. No one else wanted to go that night, especially with the weather, and that was fine by me. This particular theater was an older model, had been around for years, it still had that old time theater vibe and look, especially the refreshment stand, I grabbed my popcorn and cherry coke and headed into the theater to take a seat. Upon opening the door, the theater was literally pitch black, nothing on the screen and no runner lights on the floor even. I opted to man up and go in anyway and find a seat using my phone light. Within a couple of minutes the lights came on, and as the screening time came closer, I realized I was still alone. It was one of those old theaters where everyone walks in from the rear of the theater, not the front sides like modern ones, so every few minutes I would look behind me and still no one. As I sat there a bit spooked I could hear the storm raging outside along with the crackle of thunder as the lights dimmed and the movie began. It was ideal viewing for such a film, a film that opened up with what in my opinion, is one of the greatest openings in any horror film ever, yes the Annabelle scene. I was not only majorly creeped out, but also majorly hyped up as this scene played out to perfection. What follows probably didn’t top that opening scene, but it certainly unfolded as one classy and creepy horror film. In fact not many horror films have matched the skill that James Wan displayed within The Conjuring, and with his track record for visually arresting haunted house flicks solidified, he made the jump to billion dollar blockbuster with the most recent Fast and Furious sequel. However it wouldn’t take long for him to head back to where he most definitely felt at home. 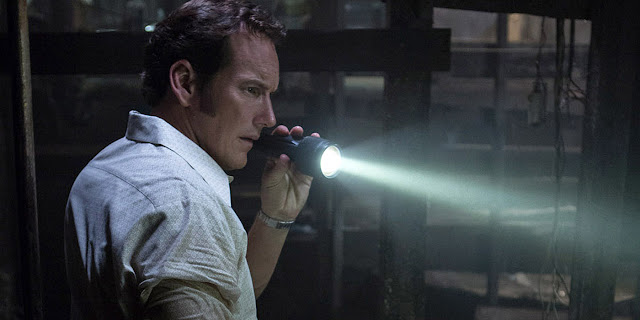 Without giving away much of anything, The Conjuring 2 begins with another cold open ala the Annabelle sequence from the original. While it may not be (in my opinion) AS good, it is still something that seasoned horror fans will get a definite kick out of and helps the film get off to strong running start, I couldn’t help but smirk when I realized what it was I was seeing. After the opening title sequence, the movie is split into two stories, one where we of course continue to follow the lives of Ed and Lorraine Warren (once again played by the always great Patrick Wilson and Vera Farmiga) and the other story, based on the Warren’s real life case dubbed The Enfield Poltergeist, where we travel to London to where we are introduced to the Hodgsons, a family of four children and a single mother who is just trying to hold things together. The youngest daughter, 11 year old Janet, (a brilliant Madison Wolfe) begins to sleepwalk, and from there, well, things get weird and much worse. Eventually this family’s misfortune makes headlines prompting the Warrens to travel over the pond to lend a helping hand, though if they are to succeed they must do so as they battle their own personal demons that have surfaced. 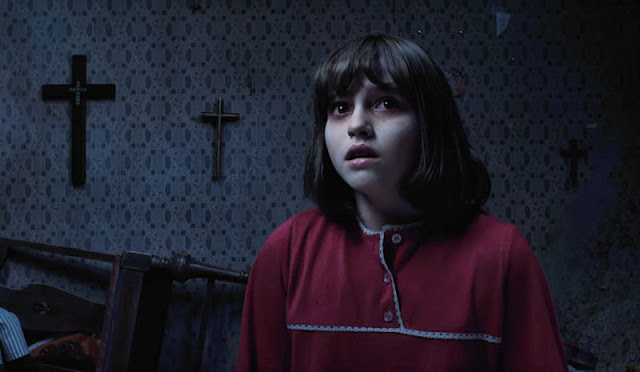 That is the gist of the story, or at least all I am willing to give away. It is simple enough and in the hands of a lesser director, it may not have the same impact, lucky for us, James Wan is up to the task of crafting one of his creepiest and best looking films yet. The UK setting adds tremendously to the atmosphere of the proceedings, they grey skys, and dead leaf covered streets set the mood and the dilapidated townhome where the Hodgsons live makes for a much better “haunted house” than the home in the original conjuring. As with any haunted house film, things start out small and escalate little by little. I know there are some horror fans out there that do not like these type of “haunting” films and that is their right, but each haunting sequence here is just so well done and some quite imaginative, I cannot imagine it not appealing to most horror fans. Wan is at the top of his game with his camera movements, cinematography and production design. The sound design (as with all Wan films) is also top notch and just adds another layer to the film. All working hand in hand to build dread and suspense and make you feel like there may be something lurking in every corner of the screen. When the Conjuring 2 is creepy, it is VERY creepy, and it at times can give you goosebumps and other times it just makes you say quietly to yourself “oh shiiiiit” at how cool yet horrifying something on screen is. Not to be outdone, the cast is stellar in their roles, with Wilson and Farmiga picking up right where they left off, while Madison Wolfe’s Janet completely holds the film together. The entire film hinges on her performance and she absolutely nailed it. Just as the film could crumble with a lesser director, The Conjuring 2 simply would not work without Wolfe. The rest of supporting cast all do their jobswhile lending credibility and weight to the proceedings. If there is anything I might find fault with it’s that the film is more effective in the early goings as things build and go berserk towards the end, it’s all pretty awesome and well done, however when things get big like that, they lack the creep factor of those more nuanced moments of dread. 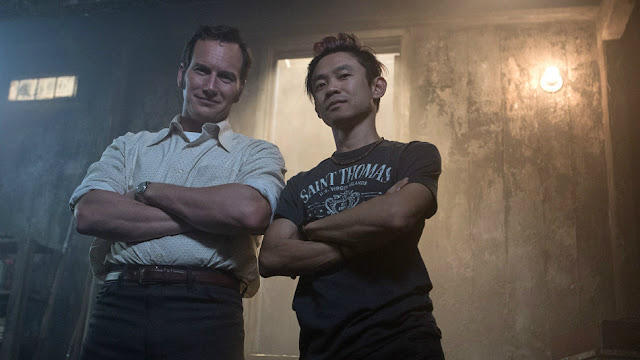 There is so much stuff in the Conjuring 2 I want to talk about, but I am not in the business of spoiling movies for people, trailers and tv spots and entertainment sites do a good enough job at ruining surprises for everyone. Maybe after it has been out for a bit I will do a follow up post about all the things I really dug. I was glad I made the effort to skip the majority of the first trailer and change the channel for tv spots, as I went in with very little knowledge of things and I will always maintain that is the best way to watch a film. For what it’s worth the crowd we watched it with was into it and clapped as the credits rolled. Everyone I spoke to after seemed to genuinely enjoy it. I would absolutely recommend it to newcomers and fans of the original, and can easily say it is going to make our best of 2016 list already. James Wan has brought horror a sequel that lives up to the original and for me, I actually preferred it over the original. Do yourself and horror a favor and hit the theaters next week to see this one, as im sure it is going to be the perfect film to watch again in October!