It Follows has been garnering heaps of heavy praise since it started hitting the festival circuits. I know I was anticipating it after watching the international teaser trailer, loved the tone it provided while not giving away anything. After seeing that, I was sold on the film and skipped any further trailers or clips that studios love to pump out in order to sell their movie by essentially spoiling the entire thing. So just as I always try to do, I went in knowing as little as possible and it paid off.

It Follows is the horror film I hoped it would be.

Written and directed by David Robert Mitchell, It Follows tells the story of Jay, a pretty young girl played by Maika Monroe (The Guest) who comes to find out that after a sexual encounter gone awry with her new boyfriend, an apparent supernatural evil has begun following her. Without getting into too much spoiler territory, Jay and her friends (all well casted with actors who feel as if they are real teens with real personalities) must try to figure out how to stay alive while avoiding the relentless titular “It”. I can understand that it sounds pretty straight forward but there are many levels at play here and it is because of the care it is handled with that elevate it into something special and frightening.

To best describe It Follows, I need to ask you to think of those nightmares that feel incredibly real while you are having them. Yet there are certain details and locations that are skewed just enough so you are aware that whats happening is not quite reality, which in turn make things even creepier. In that nightmare you rarely ever feel like you have control and are essentially at the mercy of your subconscious. Those are the nightmares you eventually force yourself to wake up from to escape, and then you realize that it’s only around 4am and you are wishing it were already daylight. Watching It Follows is like witnessing someone elses nightmare unfold on the movie screen right before your eyes. That impression of the film ended up making a great deal of sense after reading that the entire thing is in fact inspired by a nightmare the director had where he was constantly followed by a relentless shapeshifting being. The film also skews it’s own reality in a very subtle way as it’s time period is never defined and full of contradictions in a sense as the tv’s in the houses are vintage black and white sets, while one of the kids in the movie uses some sort of sea shell shaped e-reader while Jay herself has an old corded telephone in a bedroom that looks like something straight out of the 80’s. It is a interesting production design choice that adds to the disorienting dream like nature of the film. In fact the entire film is beautifully shot in a sort of cold and hazy visual style that sets the mood perfectly and that mood is one of impending doom and overbearing dread. Mitchell utilizes the bleak landscapes and grey skys of his hometown Detroit to great effect as a backdrop for his story to unfold.

That story on the surface is a metaphor for the dangers of sex, and how the decisions you make involving it can follow you for the rest of your life, however on a deeper level it’s a story about coming to grips with ones mortality and the fear that death can be around the corner at any tme. These kids in the film are only just about to get into their 20’s and already lamenting the loss of yesteryear back when they were just careless children having fun. It may not exactly resonate with everyone at the moment, but it certainly hit home for me. Death is coming for everyone at some point, and it is coming for these characters, they are constantly looking over their shoulders. In every frame you feel “It” getting closer and closer, you share in their uneasiness, even when it isn’t on screen it’s presence is felt. One presence that is not felt in the film, is that of the parents. Just like Nancy’s drunk mother from “A Nightmare on Elm Street” or Laurie Strode’s absentee parents in “Halloween” , the parents here are largely missing from the proceedings, which only helps to underscore how in over their heads these kids are. However that helps to keep the threat and horror much more personal and intimate. This is a story ultimately about youth, coming of age and realizing actions have consequences and in this case create literal demons that will haunt you for the rest of your life. 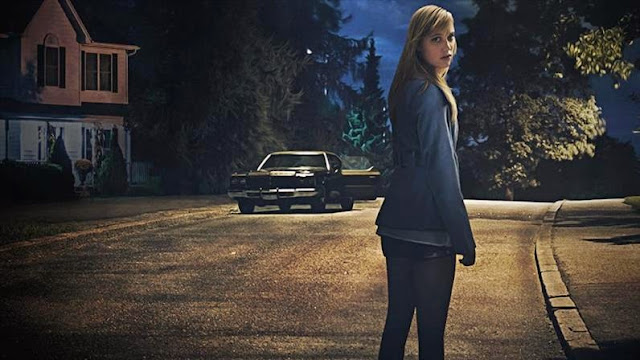 Speaking of presence, one that cannot be overlooked and is certainly a highlight of the film is the incredible score by Rich Vreeland aka Disasterpeace. Just as John Carpenter once stated that Halloween was not effective nor frightening until he added his now iconic score, It Follows would not be nearly as effective a horror film if it weren’t for the soundscape crafted by Vreeland. If watching the film is like viewing someone’s nightmare, hearing the score is akin to listening to one. It amplifies that aforementioned sense of dread to chilling effect. From the moment we are introduced to it by way of the films chilling opening sequence, it truly captures your attention and doesn’t let go. Pulsating synths, sparse piano keys, pounding basslines, among other sounds creep in and out of the film just as It Follows shapeshifting antagonist does. The score is best described as a mix between vintage Carpenter and Rob’s more recent Maniac score, it’s  also sprinkled with a healthy amount of it’s own horrific touches that make it one of the best in recent years. Vreeland’s music coupled with Mitchell’s visuals perfectly compliment eachother to cement the nightmarish world presented to us.

In the end It Follows turned out to be the type of horror film I love. It isn’t perfect but delivers an extremely creepy moviegoing experience that remains fresh and original even while harking back to the fright films of our youth. It’s cast delivers solid perfomances creating believable characters who sell the horror of their harrowing predicament. While there is little gore, it isn’t needed here as It Follows establishes it’s horror with mood and atmosphere and when all is said and done more than likely you will be thinking about it just like that recurring nightmare that leaves you shaken and uneasy within the dark.