FOUND FOOTAGE 3D One Sheet by TrueHorror.net and Matt Durston

We are extremely excited to help reveal the new one sheet we created for the upcoming film Found Footage 3D from director Steven Degennaro.

Co-designed with our good friend and frequent collaborator Matt Durston. We think the image is quite eye catching and fun, while keeping the spirit of those classic horror movie posters and VHS covers we all love so much.

As a lover of movie poster art, the opportunity to create  a new one was one I couldn’t pass up. The idea behind it was to make something that while not directly tied to the film. It still captured the spirit and concept. Much in the way there is no pumpkin headed killer in Halloween, but that original one sheet is just really striking imagery that represents the film so well. I have made many posters before for our faux movie poster projects and other “fan” posters for existing films Now being tasked with creating one for an upcoming film was exciting and I knew I had to step it up a level.  After coming up with and shooting the initial concept, I showed it to Matt who I often bounce ideas off of and vice versa. While trying to figure out what else could be done with it to make it pop, Matt drew up a few great additions that brought it all together perfectly. The result of our combined ideas is the image you see below and we couldn’t be happier to share it with everyone.

I want to thank my Mom, who spent a morning helping me find the perfect skull for the project (That was a fun day right Ma?) I also have to thank my friend Deb for her invaluable input and encouragement throughout the creative process. Special thanks to Marc from Popcorn Frights and of course Steven Degennaro for being so cool and embracing what we created. 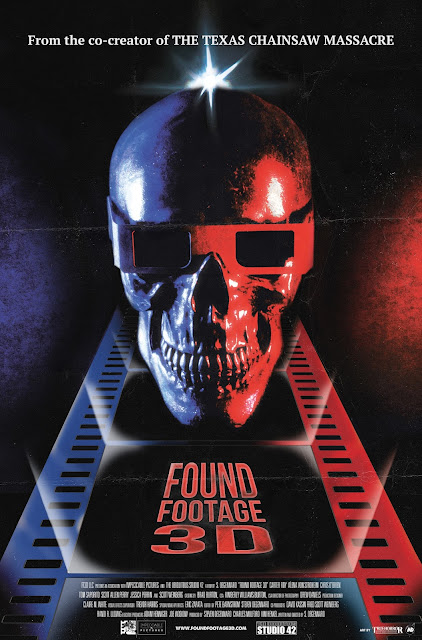 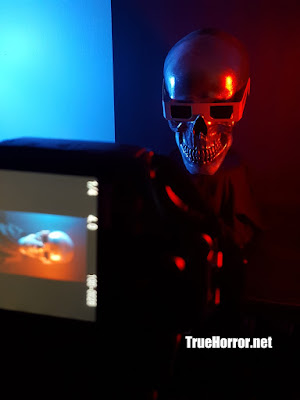 When he’s hired to document the behind-the-scenes action of the ultralow-budget horror movie Spectre of Death (“the first 3D found-footage horror film”), an aspiring filmmaker packs up his camera and travels with the film’s crew to a creepy cabin in the woods. But when the fictional evil presence from their film begins appearing in his behind-the-scenes footage, he has to figure out how to stop it, or it just may find its way into the real world.
“In the same way that Scream deconstructed the slasher sub-genre in the 90’s, FF3D takes a found-footage horror movie and populates it with people who are aware of all of the rules, tricks, and clichés of the genre. They know how to make a found footage movie. But do they know how to survive one?”

Found Footage 3D will be making it’s Florida Premiere thanks to our friends at Popcorn Frights. The screening takes place on Friday, November 4th at 8pm, at the Cinema Paradiso theater. Director Steven Degennaro will be in attendance. Be sure to get your tickets early– it is sure to be an awesome time!