One thing I wanted to do when we started TrueHorror.net was to explore my fondest memories that involved horror and my experiences with it. So in an effort to get back to that, I am turning to one of the most prevalent horror films from my youth. Full Moon’s Puppet Master series.

As I have written before, as a kid I may have loved horror but I was also pretty scared of plenty of them, which was definitely fun in a way, but while some things didn’t scare me, others definitely had an effect on me. As a kid I generally hated anything to do with dolls and puppets and I have written before about how I was terrified of the Zuni fetish doll from Trilogy of Terror and how much the original Child’s Play traumatized me to the point that I wouldn’t even look at the VHS box at the video store. Well, as it turns out, there was another video I hated looking at or walking by in the video store, the original Puppet Master. I can understand people saying, wait Puppet Master isn’t scary or even creepy and now I can certainly agree. At the time though I had no clue what it was about and the box just had one of those weird unexpected effects on me that we all have. However this was also one of the first times I decided to really face my fear head on. I eventually mustered up the courage to walk over to the video store and rent it myself. 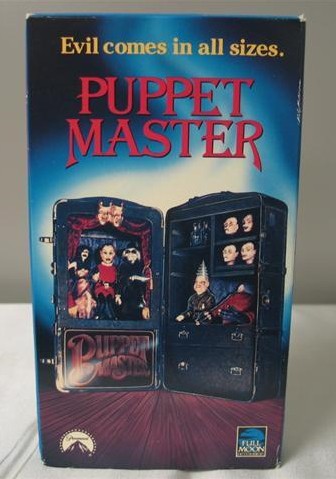 My recollection of the first viewing of Puppet Master is a bit hazy, but I remember it was day time (what a wimp) and I remember being pretty taken with the opening credit sequence and theme music. I think everyone who has watched it remembers that theme music. It was not normal horror film music, but something much more whimsical which really fit the whole idea behind Puppet Master when you think about it. I remember that opening title sequence kind of calming me and made me think, hmm this may not be so scary after all. Then it began with that POV scene of an unseen puppet running and making his way up to the hotel room where the Puppet Master himself Andre Toulon would be hiding out.  For the uninformed Puppet Master as a series revolves around the previously mentioned Toulon and his band of murderous puppets that he has brought to life using an ancient Egyptian ( I may be wrong on that) reanimation formula derived from the cerebellum of the human brain. That is the gist of it, and it actually gets really interesting when it goes back in time and tells his origin of sorts where he uses it to fight the Nazi’s who killed his friends and wife. It is actually a pretty cool backstory and concept and all of that is part of Puppet Master III, which is generally regarded as the high point for the series. Speaking of which, the series itself does not necessarily have many high points, I can freely admit that with no regrets. I think most who look at the series objectively will also state that. Yet we loved it and it’s popularity was and is still due to one thing, the Puppets themselves. 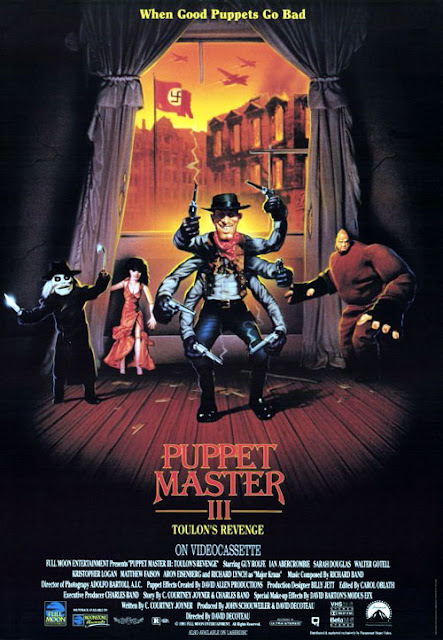 As I continued on with my first watch of the film, I had no clue what was going on as the story gets really weird when a bunch of psychics show up years later to the Bodega Bay Inn for some weird meeting and eventually the Puppets awaken and come after them one by one and it turns out it’s the weird plan of their dead friend who was reanimated somehow and blah blah blah the Puppets are awesome and the story is not. What I realized early on though was that these puppets were much cooler than they were scary. There was Jester, Leech Woman (or Ms. Leech depending on the movie) Tunneler, Pinhead and of course everyone’s favorite Blade. That is not to say they couldn’t BE scary, but as presented here, the way they are shot and filmed, they were just more of a cool thing than anything else. I remember after finishing the weird movie I said to myself, my friends have to see this. Eventually everyone did and particularly remember my friends Joey and Cesar being the ones who were really into it, and remember them being the ones who would get excited to watch the eventual sequels with. 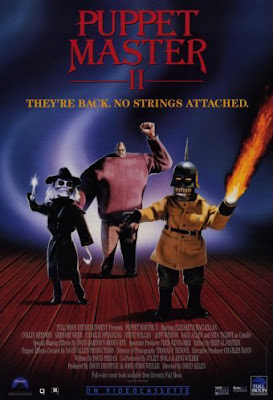 Back then, you really didn’t know about a sequel till either seeing the poster in the video store or it was on the shelf, since these were direct to video films as all Full Moon films were. So it was always exciting when a new one showed up on the shelf. Puppet Master II in particular is a strange film that I wont get into as just trying to remember it all almost gave me a headache, but it absolutely has what is probably the best scene in the series. Introduced in part II is a new Puppet named Torch. Torch is awesome. Torch’s special ability (as you can see above) is he has a flamethrower hand. At one point in the film there is a little asshole kid who finds him and starts whipping him for fun. Torch gets pissed off. Torch does exactly what you would want him to do to the bratty kid. We all loved it. 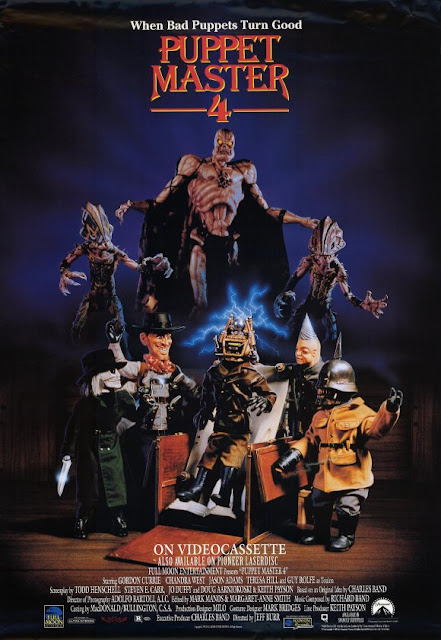 I remember years later when my friend Joey had rented one of the newer ones possibly part 4 or 5. I We knew they weren’t good, We knew the budgets were low and they did what they could with what they had, but we were still glad that the series continued on, even if from there on out it got even stranger, and crappier ,but no one could accuse them of being stagnant with their ideas. The films had a certain charm for their time and we almost never cared about the humans involved aside from the girls we deemed attractive at the time, but they were almost comforting at that point. Back then the video stores were a gamble and we knew this, more often than not the gambles did not pay off, but Puppet Master was a known commodity on the shelf. We just wanted to see the Puppets do their thing while eating Doritos or popcorn and hanging out with each other. That’s what it was all about then. 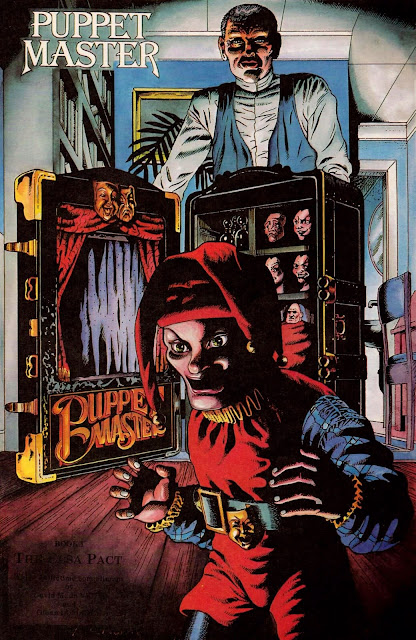 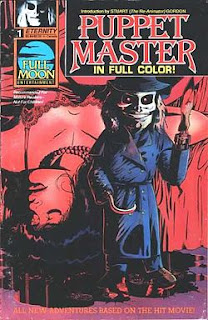 One day I received mail from my Dad, he had sent me a Puppet Master comic book from Eternity Comics. I was so surprised because I had no clue it even existed and the covers were awesome, I wish I still had them and wish I was able to get all of them, but never did, as I type this I am eyeing some on ebay and I think I am going to bite. From what I remember the comics told a much more coherent story than the films. It was just another sign of how popular these movies actually were at the time, which I think is a testament to them, particularly because they never even hit theaters, and still gained such a big following. Years after that toys would be released and even many more years after that, meaning right now a new comic is out that I am actually about to start reading as well. The original Puppet Master released on video in 1989 and here we are in 2016 and a series of direct to video horror films of varying quality has stood the test of time and it can all be credited to how cool the Puppet Designs are. 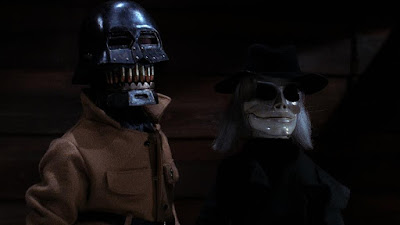 I have now and then thought about how I would love to see a bigger budget reboot of this series. I know it will almost never happen but imagine one that takes the best elements from the story, some updated puppet techniques (no cgi please) a real cast and a real script to craft an actual GOOD Puppet Master film. I would definitely go the WWII route and have the puppets hunt Nazi’s. I just think there is so much potential here to do the character designs justice with a film that can make them as creepy as I originally thought they would be when I first saw that box. Everyone has their own video store memories, particularly horror fans. The Puppet Master series is one of the biggest Video store memories I have and it was fun to look back on them even if just for a few. We horror fans are a nostalgic bunch and I hope reading this may have brought back some fond memories of days gone by for you all as well.